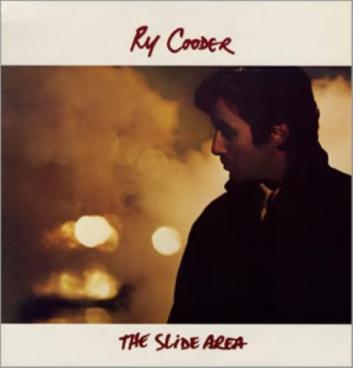 Gavin Lambert’s 1959 book ‘The Slide Area’ was a collection of inter-related stories about a group of Hollywood’s lonely losers.

His theme was that California’s natural phenomena made ‘normal’ behaviour virtually impossible. 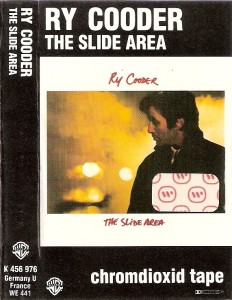 ‘The Slide Area’ obviously rang a bell with Ry. His 1982 album of the same name also featured an array of characters not exactly thriving in the Dream Factory.

But it also turned out to be almost the complete opposite of Cooder’s commercial breakthrough, 1979’s slick, sparkling, digitally-recorded Bop Til You Drop.

The Slide Area sounds like what it is – a rough-and-ready band, often audibly cued by Cooder, playing songs of varying quality live in the studio with minimal, if any, overdubs.

‘Which Come First’, ‘Yes It’s Me And I’m Drinking Again’ and ‘Mama Don’t You Treat Your Daughter Mean’ are incredibly loose, with some bum notes and tentative moments left in. Ry’s vocals are similarly raw but full of passion. On ‘Mama…’ he sounds a bit like Bobby ‘Blue’ Bland.

Drummer Jim Keltner is uncharacteristically hyperactive, speeding up drastically on almost every song (definitely no click tracks involved with this album), but full of creativity on what sounds like a homemade kit with timbale, double kick drums, a trash can and a few different snares.

Cooder composes a lot more than on recent albums and even co-writes an ’80s classic with Keltner, ‘UFO Has Landed In The Ghetto’, which finds time to gently lampoon disco, rap and funk with references to the Bee Gees and George Benson.

But perhaps predictably the three cover tunes are the standouts: a Tex-Mex version of Curtis Mayfield’s ‘Gypsy Woman’, funky take on Dylan’s ‘I Need A Woman’ and a gloriously arse-over-tit ‘Blue Suede Shoes’.

But The Slide Area also marked the end of an era. Americana, roots music and blues were out, synths and drum machines were in.

Live, it was a different matter – Ry was still a big draw in 1982, playing legendary gigs at the Hammersmith Odeon (my dad took me to one night, maybe my first ever major gig) and big shows all over Europe. But that too proved a false economy.

‘Someone yelled “Think of the money!” from the audience (during a 1977 Hammersmith Odeon gig). I’d like to show him my bank balance. I could never make a dime doing anything. I came back to California in debt. I’d make a record and I’m broke cos they’re not making any money, they don’t sell. I said, to hell with it,’ Ry told Q Magazine in 1987.

It was back to the movie soundtracks. For a while…