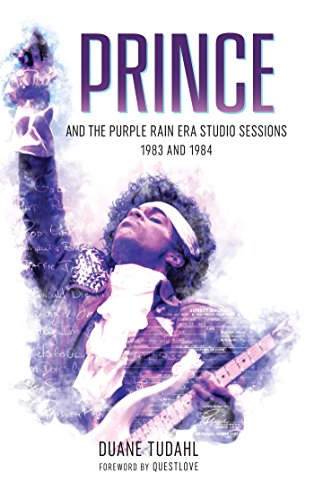 There aren’t many titles in the ‘complete studio sessions’ pop library. Mark Lewisohn and others have done sterling work in this area on the Beatles, and Elvis’s career has been similarly scrutinised. But the relative lack of material begs the question – do we really want to know everything about our icons’ recording histories?

When it comes to Prince, the answer may be a resounding yes, since his mystique is so bound up with his status as a master multi-instrumentalist, famously with hundreds of unreleased songs in the studio vaults.

So such a book was probably only a matter of time, but fair play to Duane Tudahl for ‘The Purple Rain Studio Sessions’, a mainly fascinating day-to-day diary of Prince’s studio work (at LA’s Sunset Sound and various facilities and warehouses around Minneapolis) when he was recording the songs that made up Purple Rain, Around The World In A Day and key side projects with Sheila E, Jill Jones, Stevie Nicks, The Time and The Family.

The first half of the book is fascinating for three reasons – it outlines the vengeful decline of one band (The Time) and the adrenalized formation of two others (The Revolution and The Family), though you have to be a major fan of the former to enjoy these sections. It also captures Prince at a crucial juncture in his career, when he was going from mid-table journeyman to title contender.

What comes across loud and clear in the second half is the relentless forward motion of Prince’s creative drive – for example, just a week before the start of his Purple Rain tour, he was completing work on both the Around The World In A Day and The Family albums! We also get a real sense of his famously-short attention span – he curtailed the Purple Rain tour at its absolute peak, bored of the material after only six months.

But the bane of the book is repetition. Too many calendar days are similar –  there’s only so much you can say about two weeks of ‘Baby I’m A Star’ overdubs. In Tudahl’s need to flesh out sometimes fairly uneventful studio days, he uses variations on very similar quotes.

But he also gets some great interview material from almost all of the major players, and there are plenty of revelations and interesting theories – he reveals that ‘When Doves Cry’ was written on Tuesday 1st March 1984, two days after Prince lost two Grammy awards to Michael Jackson. Did this double setback prompt some fairly uncharacteristic introspection, spawning his biggest hit?

Prince is also revealed as a major Springsteen fan, bringing the saxophone sound into his music mainly due to Clarence Clemons’ playing with The Boss. Then there’s his little-known charity work, including a touching photo of a gig at a Minneapolis deaf school, and we also get an insight into his fear before the first night of the Purple Rain tour.

There are also interesting comments about Prince’s business deals – Wendy Melvoin: ‘Collaboration with Prince was a reality, but it didn’t pay the bills.’ Her sister Susannah goes as far as to say that Prince would test people’s loyalty by paying terrible money. These are tantalising – if troubling – morsels, never fully explored by Tudahl.

But he gets closer than most to revealing the true Prince, warts and all. Spoiler alert: some of it isn’t pretty. ‘The Purple Rain Studio Sessions’ is a major achievement and a real labour of love. The years of research have certainly paid off. It’s a vital buy for hardcore Prince fans, but arguably only the second best book on the Minneapolis master – just pipped at the post by Per Nilsen’s ‘Prince: The First Decade’.