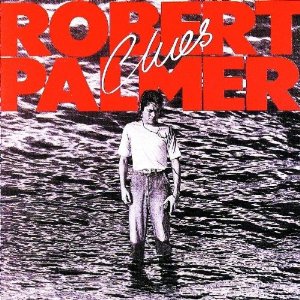 If in 1979 you’d been asked to draft a list of key 1970s artists most likely to go ‘new-wave’, Robert Palmer would surely have been near the bottom.

After all, he spent most of the decade as a kind of sophistifunk Bryan Ferry, with his ‘problematic’ album covers and Little Feat-inspired grooves.

1979’s Secrets had shown glimpses of ‘rock’, but Clues, released 40 years ago this week, went the whole hog. And, along with 1978’s Double Fun, it’s probably his most consistent album and definitely worth a reappraisal.

There are good omens in the liner notes – a Talking Heads guest appearance here, a Gary Numan song there, Compass Point mixmaster general Alex Sadkin (Nightclubbing etc.) on knob-twiddling duties, Free’s Andy Fraser on bass. And Clues delivers big-time, exploding out of the speakers and clocking in at just over half-an-hour (it must sound great on vinyl).

It’s buoyed by two superb singles, ‘Looking For Clues’ and ‘Johnny And Mary’, the former scraping into the UK top 40 (shockingly, Robert only had SIX top 40 singles during the 1980s…). But there are other treats throughout: ‘Sulky Girl’ sounds curiously like Low-era Bowie, with its histrionic vocals, unhinged guitars, processed drums and barrelhouse piano.

The Beatles cover ‘Not A Second Time’ is excellent (with a new second verse), as is the Numan contribution ‘I Dream Of Wires’. When Gary’s synths squelch into action, it’s a great moment, as is the funky fanfare in the middle. And no-one but Palmer could have pulled off the minimalist Township swing of ‘Woke Up Laughing’, featuring a brilliant, polyrhythmic vocal performance.

If Good Drum Sounds are your thing, Sadkin delivers a masterclass here. I’ll be amazed if anyone can point to a better-recorded 1980s kit than on album-closer ‘Found You Now’, played by the excellent Dony Wynn (who he?).

Clues was, perhaps surprisingly, not a big success in the UK, making just #31. Nor did it go down too well in the US, peaking at #59. But it was a big hit in France, Sweden and the Netherlands.

Robert generally gets a bad rap these days, maybe due to those album covers (despite glowing character references in Phill Brown’s ‘Are We Still Rolling’ and Guy Pratt’s ‘My Bass And Other Animals’), and he seldom gets the ‘career overview’ treatment in the rock monthlies. 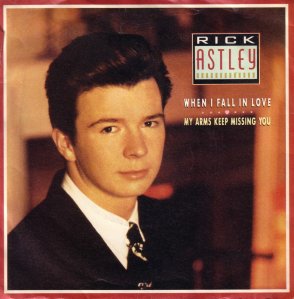 We’ve looked at some of the good covers of the 1980s before – but how about the stinkers?

Reader: I’m pleased to report that finding them was not an easy task. A quick Google survey of ‘worst covers of all time’ will not reveal many from the ’80s (no, Rockwell’s version of ‘Taxman’ really isn’t that bad…).

But the variety of crap covers is worth noting. In the 1980s, anyone was liable to produce a shocker, from the ageing chart regular to the littlest indie.

Some took them to the toppermost of the poppermost – indeed most of the below were big hits. But of course familiarity breeds contempt…

Most of these efforts, though, smack of both desperation and a dearth of material. The net result is usually a kind of audio shrug. And hey, there’s also that other reliable, recurring theme – the overproduction of post-1985 offerings…

So let the countdown of dodgy ’80s cover versions commence, with this curio:

17. Tin Machine: ‘Working Class Hero’ (1989)
Pointless cover which is one of several fillers on the ‘difficult’ second side of Bowie’s rather good band debut.

16. The Power Station: ‘Harvest For The World’ (1985)
Interesting to hear Robert Palmer challenge himself range-wise but his hysterical vocal and the band’s rather limp arrangement remove all of the majesty of the Isley Brothers’ original.

14. Aztec Camera: ‘Jump’ (1984)
Why oh why, Roddy? Some grotty Linn drum programming and an insipid vocal on a pointless Van Halen cover which takes away all the fun of the original. Maybe that’s the point.

13. The Communards: ‘Don’t Leave Me This Way’ (1986)
I’m reluctant to diss the brilliant Jimmy Somerville but this cover of a Philly classic just drove one to distraction, not helped by the desperately upbeat video.

11. The Housemartins: ‘Caravan Of Love’ (1986)
The concept is a good one – Isley Jasper Isley’s brilliant original was an electro/gospel mashup crying out for an a cappella – but Paul Heaton’s lead vocals and a very unadventurous arrangement scupper this UK #1 from the start.

10. The Flying Pickets: ‘Only You’ (1983)
Yes, it’s the other a cappella song to hit UK #1, but where to start? How about: out-of-tune vocal stacks (and a very unsubtle use of Fairlight vocals) and a chronically unhip bunch of guys? Oh, and it also came out too soon after the Yazoo original.

9. Pet Shop Boys: ‘Always On My Mind’ (1988)
Effective but gross cover, and of course another UK #1 single. Like gorging on cream cake, there’s a brief rush but then a lingering nausea. It’s also arguably the point where the Boys became an ’80s brand rather than a unique songwriting force.

7. Bomb The Bass: ‘Say A Little Prayer’ (1988)
An on-the-nose, in-your-face curio which never convinces. The vocals just set my teeth on edge right from the off. But it still got to #10 in the UK.

3. Gary Numan/Leo Sayer: ‘On Broadway’ (1984)
This is so bad it’s almost good. But only almost. You can’t help but feel sorry for these two gents whose careers had gone properly arse-over-teacup by this point. Numan fans in particular must have been hiding behind the sofa.

2. Band Aid II: ‘Do They Know It’s Christmas’ (1989)
Stock Aitken & Waterman were tasked with updating this one, coming up with a pointlessly-reformatted, boil-in-the-bag cover without any of the original’s musical grace notes, though singer Matt Goss gives a good account of himself.

1. Thompson Twins: ‘Revolution’ (1985)
The Twins go rawk, with disastrous results. It was also the point where they started to believe the hype – always a bad move. Tom Bailey’s lead vocal is a travesty and it’s also a bum note in Nile Rodgers’ production career. 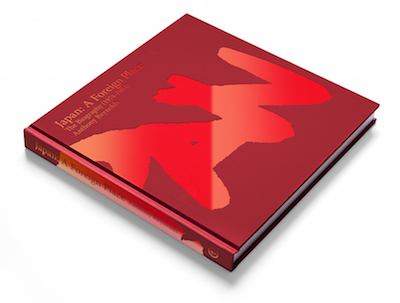 It’s only befitting that Japan – a groundbreaking ’80s band who undeniably put a big emphasis on surface and style – should be rewarded with Anthony Reynolds’ glossy, beautifully-designed biography.

To paraphrase an old joke, when I got ‘A Foreign Place’ in my hands I didn’t know whether to read it or frame it. It comes with a weighty, thick binding and a glorious cover featuring the band’s characteristic logo.

It’s also packed with many fantastic photos, almost all of which were new to this correspondent. Many of them even appear to show David Sylvian smiling… 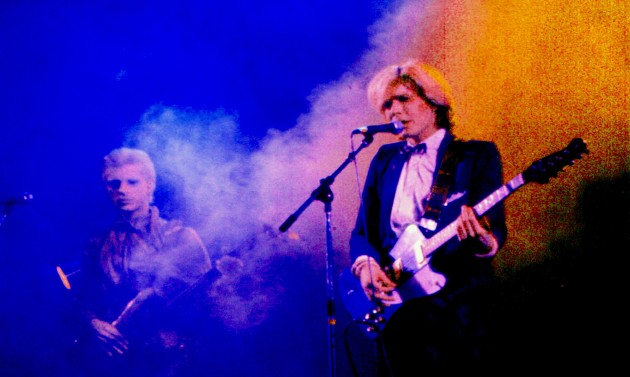 But what of the book’s content? Though it will satisfy the most information-starved Japan fan, with detailed commentaries on the band’s music and relationships, it also works very nicely as a portrait of the wider late-’70s/early-’80s music scene: Giorgio Moroder, Ryuichi Sakamato, Simon Napier-Bell, Gary Numan and David Bowie make regular appearances.

Though the band were, critically, a laughing stock up until the Quiet Life album in 1979, it’s often forgotten quite how out of place they always were in the UK pop firmament.

From androgynous glam-rockers to glacial art-popsters, Japan resolutely stuck to their own guns and, by the time of their split in 1983, had become probably the most influential group of their era. 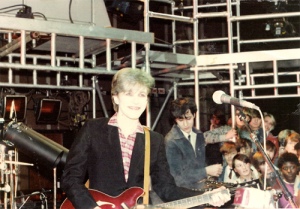 Reynolds expertly builds up a lucid picture of South-East London in the 1970s with its racial/cultural/class divisions and dodgy schoolmasters.

The brothers Batt (soon to be rechristened David Sylvian and Steve Jansen) hooked up with schoolmate Andonis Michaelides (soon to become Mick Karn) to jam and write songs.

Jumping forward a bit, we get many gossipy revelations: Sylvian’s toe-curling audition for legendary manager Simon Napier-Bell, Gary Numan’s frequent stalking and also Japan’s early (and uniformly bad) experiences on the live scene of the late-’70s, supporting the likes of Blue Oyster Cult.

Though the band were all resolutely straight, onstage they were subjected to constant homophobic comments and a barrage of missiles. Reynolds reveals that Black Sabbath guitarist Tony Iommi had a real thing for Sylvian, pestering Napier-Bell for an introduction, not realising Sylvian wasn’t a ‘chick’. But this surely wasn’t the first time Sylvian had been mistaken for Brigitte Bardot. 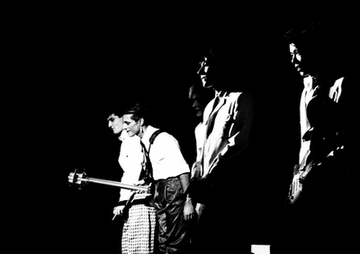 Japan’s pop breakthrough is expertly handled, Reynolds spelling out in great musical detail how Sylvian’s emergence as a high-quality songwriter fused with Richard Barbieri’s canny synth programming and the stunning Karn/Jansen rhythm section to finally produce some music of worth.

But success had come at a great cost; the band had completely grown apart, not helped by Karn’s girlfriend moving in with Sylvian on the eve of an important tour.

This Kickstarter project has clearly been a labour of love but ‘Japan: A Foreign Place’ punches way above its weight with in-depth interviews, sumptuous design and anecdotes aplenty.

Occasionally, the text has a repetitious, ‘cut and paste’ quality, but this is a minor quibble. It’s hard to imagine that anyone will ever write a better book about one of the key bands of the ’80s. Highly recommended.

‘Japan: A Quiet Place’ is published by Burning Shed.