Maybe it was the lockdown popcorn, maybe a great recent piece in Empire magazine initiated by director Edgar Wright, but this time away from the cinema has got me waxing all nostalgic.

Will the big screen ever regain its mojo? The alternative is a crushing thought.

Don’t know about you, but my idea of a night out at the flicks doesn’t involve wearing a mask and showing a security guard my vaccination certificate at the door. If that’s the future of moviegoing in Brave New Britain, forget it, I’m done.

And whatever the merits of Netflix et al, they can’t replace the shared experience watching a superb movie on a big screen with great sound and those ‘wonderful people out there in the dark’ (© ‘Sunset Boulevard’).

So, if it’s all over – and I hope it’s not – here are some memorable movie moments of the last 40 years (all in London cinemas unless otherwise stated), from the sublime to the shocking (with spoilers…). I hope they inspire some recollections of your own.

Seeing ‘The Exorcist’ at a cinema above a nightclub in Kingston circa 1989, me absolutely terrified as Salt-N-Pepa’s ‘Push It’ was heard pulsating through the floorboards… The entire audience laughing throughout ‘Prince Of Darkness’ (it’s supposed to be a horror movie…) at the Hammersmith ABC circa 1987… A late-night screening of ‘Carrie’ at the Prince Charles circa 2012, the young, hip crowd jumping three feet out of their seats upon the famous finale…

At the same venue circa 1994, a ‘lone white male’ saying very loudly, apropros of nothing: ‘What a f***ing bitch’ as the credits rolled at the end of ‘The Last Seduction’ (it’s a female-fronted, neo-noir)… Almost having an out-of-body experience as Jeff Bridges walked through the plane at the end of ‘Fearless’ at the Prince Charles circa 1994… The ripples of hilarity echoing around the cinema during Michael Wincott’s cracking cameo as Kent in ‘Talk Radio’ at the Riverside Hammersmith circa 1988…

Spooked amongst the drinking/smoking audience during ‘The Blair Witch Project’ at the Notting Hill Coronet in 1998… The quietest, most rapt audience ever for Orson Welles’ ‘The Trial’ at the BFI (formerly NFT) in 2019… Audience hilarity during Hugh Grant’s performance in ‘Bitter Moon’ at the Prince Charles circa 1994… Early cinema revelations, seeing ‘Jaws’, ‘Close Encounters Of The Third Kind’, ‘Airplane’ and ‘Raiders Of The Lost Ark’ between 1980-1982… Seeing ‘Rain Man’ two nights in a row at the Richmond Odeon in 1988… The ‘Star Wars’ triple bill at the same venue circa 1985… A Laurel & Hardy all-dayer at The Kings Cross Scala circa 1988… Terrified watching ‘Scream 2’ on my own in a huge moviehouse in Times Square, NYC, the only other paying customer deciding to sit directly behind me… Meeting David Lynch – and getting his very odd autograph – after a screening of ‘The Straight Story’ at the NFT in 1999… Seeing ‘Fame’ at a huge, almost completely empty Hammersmith Odeon circa 1983… Not hearing one line of dialogue during ‘Fletch’ as the assembled teens screamed/laughed/threw food at the screen, Putney Odeon, 1985… Panic and nausea at the finale of ‘The Vanishing’ at a late-night screening at the Ultimate Picture Palace in Oxford circa 1991… Watching JG Ballard and David Cronenberg chatting amiably onstage after the London premiere of ‘Crash’ at the NFT, 1996… Sitting behind a constantly laughing Jimmy Page at a screening of ‘Beware Of Mr Baker’, the Riverside Hammersmith circa 2012… Seeing ‘Heathers’ at the same venue in 1989 and thinking: well, that’s almost the perfect film… Feeling the whole packed house take an inward breath as the body crawled out of the TV set during ‘Ringu’ at the ICA, 1998…and…and…?

It’s difficult to view a film like ‘Heaven’s Gate’ these days shorn of all the hoo-ha that accompanied its troubled production and disastrous cinematic release (outlined in the definitive book and documentary ‘Final Cut‘).

But let’s give it a try. It was of course the notorious movie that destroyed United Artists and pretty much ended the New Hollywood ideal of director-as-auteur; the $44 million turkey which grossed just $1.2 million at the box office.

Writer/director Michael Cimino went looking for ‘the poetry of America’ in his film about the Johnson County War of 1896, when the Wyoming Stock Growers’ Association decided that new settlers – mainly poor, immigrant homesteaders – were stealing cattle, decreeing that 125 of these so-called thieves be hunted down and either hung or shot.

Though Cimino’s film ends with a battlefield bloodbath (including many horses in apparent physical peril which led him into a further unwanted lawsuit), history records that ‘only’ two people lost their lives in the Johnson County War.

But, defending his screenplay and movie to the end, Cimino clung steadfastly to one of his directing/writing credos: ‘I use history freely’.

But, historical license aside, how much of a turkey is ‘Heaven’s Gate’ really? Can any movie starring Kris Kristofferson, Jeff Bridges, Christopher Walken, Brad Dourif, Mickey Rourke, Sam Waterston, John Hurt and Isabelle Huppert really be such a dog?

Yes. ‘Heaven’s Gate’ is that special kind of crap movie, the indulgent folly that spews elongated scenes out all over the place in the hope that something will stick.

Vilmos Zgismond’s camerawork is of course gorgeous; grainy and sepia-tinged, frequently reminiscent of the era’s stills photography. The movie frequently delivers the awesome image, including one famous panning shot across immense smokestack chimneys and hoards of wandering, displaced immigrants. 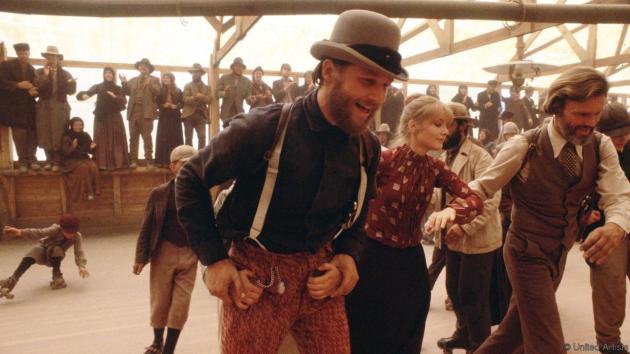 But then there’s the inaudible dialogue and strange, schizoid reaction shots. As the film progresses, Kristofferson becomes more and more inactive and dramatically impotent, while Bridges, Dourif, Hurt and Rourke are chronically underused.

Huppert is virtually incomprehensible in a fairly thankless role (turned down by every major female star of the era including Jane Fonda and Diane Keaton).

Cimino’s war metaphor in ‘The Deer Hunter’ was Russian roulette, but this time it’s endless cock-fighting, waltzing and rollerskating.

He clearly feels that the film says something important about America’s treatment of its poor and disenfranchised (and it’s certainly interesting viewing that aspect through modern eyes), but unfortunately the scenes of political wrangling/bargaining are interminable.

Pauline Kael memorably said that it was easy to think about what to leave out of ‘Heaven’s Gate’ but hard to think what to leave in. That’s the impression left with this writer too.

Quite frankly, apart from the stunning photography, one of the few pleasures watching the film again was spotting the gorgeous Rosie (‘Roseanne’ in the credits) Vela’s small but important cameo (see below). ‘Magic Smile’ indeed.