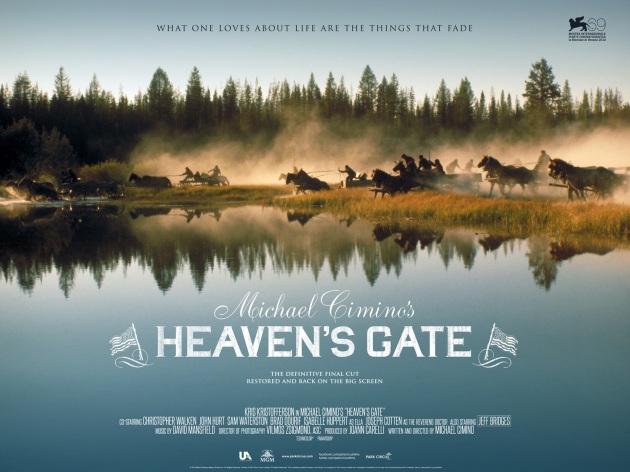 It’s difficult to view a film like ‘Heaven’s Gate’ these days shorn of all the hoo-ha that accompanied its troubled production and disastrous cinematic release (outlined in the definitive book and documentary ‘Final Cut‘). But let’s give it a try.

It was of course the notorious movie that destroyed United Artists and pretty much ended the New Hollywood ideal of director-as-auteur; the $44 million turkey which grossed just $1.2 million at the box office. Writer/director Michael Cimino went looking for ‘the poetry of America’ in his film about the Johnson County War of 1896, when the Wyoming Stock Growers’ Association decided that new settlers – mainly poor, immigrant homesteaders – were stealing cattle, decreeing that 125 of these so-called thieves be hunted down and either hung or shot.

Though Cimino’s film ends with a battlefield bloodbath (including many horses in apparent physical peril which led him into a further unwanted lawsuit), history records that ‘only’ two people lost their lives in the Johnson County War. But, defending his screenplay and movie to the end, Cimino clung steadfastly to one of his directing/writing credos: ‘I use history freely’.

But, historical license aside, how much of a turkey is ‘Heaven’s Gate’ really? Can any movie starring Kris Kristofferson, Jeff Bridges, Christopher Walken, Brad Dourif, Mickey Rourke, Sam Waterston, John Hurt and Isabelle Huppert really be such a dog? Yes. ‘Heaven’s Gate’ is that special kind of crap movie, the indulgent folly that spews elongated scenes out all over the place in the hope that something will stick.

But then there’s the inaudible dialogue and strange, schizoid reaction shots. As the film progresses, Kristofferson becomes more and more inactive and dramatically impotent, while Bridges, Dourif, Hurt and Rourke are chronically underused. Huppert is virtually incomprehensible in a fairly thankless role (turned down by every major female star of the era including Jane Fonda and Diane Keaton).

Cimino’s war metaphor in ‘The Deer Hunter’ was Russian roulette, but this time it’s endless cock-fighting, waltzing and rollerskating. He clearly feels that the film says something important about America’s treatment of its poor and disenfranchised (and it’s certainly interesting viewing that aspect through modern eyes), but unfortunately the scenes of political wrangling/bargaining are interminable.

Pauline Kael memorably said that it was easy to think about what to leave out of ‘Heaven’s Gate’ but hard to think what to leave in. That’s the impression left with this writer too. Quite frankly, apart from the stunning photography, one of the few pleasures watching the film again was spotting the gorgeous Rosie (‘Roseanne’ in the credits) Vela’s small but important cameo (see below). ‘Magic Smile’ indeed.