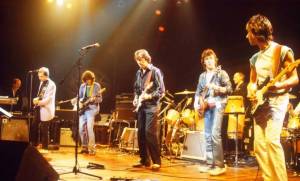 Legendary producer/engineer Glyn Johns has worked with many of the biggies (The Beatles, Led Zep, The Stones, The Who), but arguably his most important task was putting together the Action for Research into Multiple Sclerosis (ARMS) concerts on Ronnie Lane’s behalf.

The whole concert is worth watching and occasionally superb (check out Clapton’s versions of ‘Lay Down Sally’ and ‘Cocaine’), but Beck’s set is particularly fascinating. It was three years since his (superb) last studio album There And Back and he hadn’t played a major gig for almost that long. A clearly under-rehearsed band did their best with the RAH’s famously dodgy ‘rock’ sound (despite Beck’s gorgeous stereo delay, if you’re listening on headphones/speakers), not helped by drummer Simon Phillips being set up about 20 yards behind the rest of the group!

But it’s a great success, mainly through the musicians’ sheer force of will and Beck’s outrageous playing (check out his solo on ‘Led Boots’). The Tony Hymas/Fernando Sanders/Phillips rhythm section is terrific, and there’s even a funny version of ‘Hi Ho Silver Lining’ featuring Beck’s reluctant vocals alongside Winwood and Fairthweather-Low.

Just over 20 years later, on 24th June 2004, Beck was back at the Albert Hall for his 60th birthday gig, and I had a good seat. His live outings were much more common at this point; recently he’d played Hyde Park and also celebrated 40 years in the music biz at the Royal Festival Hall with John McLaughlin and The White Stripes.

But this concert was particularly notable for featuring enigmatic keyboard genius Jan Hammer, one-time Mahavishnu member and chief collaborator with Beck on Wired and There And Back. Making up the numbers were the phenomenal Mondesir brothers: Mike on bass, Mark on drums.

Beck hardly seemed to have aged. Wearing black jeans and black vest, he stalked the stage like a born showman, exchanging grins and winks with Hammer, occasionally punching the air to emphasise a musical flourish. However, things started a little uncertainly; ‘Freeway Jam’ and ‘Star Cycle seemed leaden. But by the time Beck roared into ‘Big Block’, the energy level of the band had gone up two or three notches.

Old favourites ‘Goodbye Pork Pie Hat’, ‘Where Were You’ and ‘Blue Wind’ seemed to mean little to the Albert Hall audience but the long-hairs reacted more positively to Beck’s most recent work from albums like You Had It Coming and Who Else?. There were some unintentionally amusing Tap-esque moments too, like the big-screen footage of Jeff’s souped-up hot rods during ‘Big Block’ and the cloud of dry ice which almost engulfed him during ‘Goodbye Pork Pie Hat’.

For the encore, Ronnie Wood sauntered on to play a charmingly ramshackle version of The Meters’ ‘Cissy Strut‘. Two old rockers from Surrey playing a funky New Orleans anthem? That’s the majesty of fusion!

So, while they’re still around, let’s cherish El Becko and the best of British. (And I can’t believe this is the first time I’ve featured Jeff – one of my all-time musical heroes – on this website. Better late than never, I suppose…)