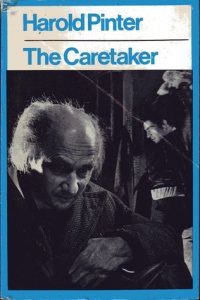 Playwright, actor, activist and poet Harold Pinter, who died on Christmas Eve 2008, would have been 90 years old today.

I couldn’t let 2020 pass without marking that fact and celebrating the 60th anniversary of ‘The Caretaker’.

When I started my English Literature ‘A’ Level at the very end of the 1980s, theatre had barely appeared on my radar. I’d seen some Shakespeare, Webster, Sheridan, maybe a bit of Ayckbourn, mostly on school trips. Nothing really hit home. But then my excellent teacher Hugh Epstein introduced us to ‘The Caretaker’.

Needless to say, it was like no other play I’d read before. This was the language of the West London streets that I knew. It covered very familiar territory in terms of its themes too.

Pinter’s legendary, hilarious piss-taking was evident from early on – mainly courtesy of the Mick character – but there was something else coming through loud and clear, something heroic, empathetic, charitable, even noble. I was gripped and it began a love affair with Pinter’s work that has lasted almost 30 years.

‘The Caretaker’ premiered on 27 April 1960 at The Arts Theatre in London, and starred Donald Pleasence, Alan Bates and Peter Woodthorpe. It was a big hit, Pinter’s breakthrough play after a difficult experience with ‘The Birthday Party’.

An excellent movie, starring Pleasence, Bates and Robert Shaw, was made in 1963, shot in Hackney and adapted by Pinter himself.

There are so many other great London Pinter memories, many involving his acting performances in his own plays: ‘No Man’s Land’ at The Almeida, ‘The Collection’ and ‘The Hothouse’ at the Richmond Theatre.

Also Ian Holm in ‘Moonlight’ at The Comedy Theatre and Michael Gambon’s turn as Davies in ‘The Caretaker’ at the same venue.

Of course he wasn’t only a playwright, actor and poet. A cursory look at his public appearances now – especially those in the last 20 years of his life, when he received the Nobel Prize In Literature and spoke passionately at various rallies – suggests that there are very few public figures around these days with his kind of gravitas. He was known to be prickly – aren’t we all – but also exceptionally generous, as he was to this writer.

He’s much missed. Happy birthday Harold. And enormous thanks to Hugh Epstein who brought ‘The Caretaker’ to life.

Michael Billington’s The Life And Work Of Harold Pinter